This article has been visited 8,272 times

Redefining the species. It is time to change our perception of the people that went before us and those we live amongst A star studded multinational cast informed and entertained during the three day Calpe Conference that concluded on Saturday 15th September.

The Calpe Conference has been an annual event for twenty two years. They are events where experts in a range of fields can share knowledge across disciplines and allow interested lay people to be informed of the latest developments across a broad range of specialities, disseminating knowledge into the wider world. Previous conference topics have included human evolution, conservation and natural history but a recurring theme in one guise or another has been the Neanderthals and the other hominids that lived during the Old Stone Age or Palaeolithic era.

Why a redefining is necessary Scavenging on the shoreline

Following the 2018 conference it is likely that our whole concept of the relationships between Neanderthals and hominids broadly contemporaneous with them and those that went before and came after them will have to be revised. It is possible that the very manner in which the whole subject of evolution, not just hominid, is taught and the terminology used will have to, appropriately enough, “evolve”, to cope with that revision. As Clive Finlayson said this year, ‘It is time to produce a Late Pleistocene Homo sapiens species monograph’. It is time to change our perception of the people that went before us and those we live amongst.

The impetus for this statement go back some time. It has long been realised that evolution is a constant process and that species do not suddenly appear overnight, although that is how it appears in the fossil record. Four years ago John Hawks told me that it could take a million years for a higher primate to speciate. What that basically means is that for a long time after members of a species become geographically separated or solely occupy an environmental niche, they continue to be members of the same species even though they may evolve in different directions, developing different physiologies and undergoing changes in physical appearance. Peter Wheeler showed us that there is little evidence that certain anatomical features of the Neanderthals were adaptions to cope with cold weather and could even have been pre-existing conditions when the group of hominids that were to become Neanderthal left Africa. Those hominids slowly evolved to lose the ‘cold adaptive’ features and, incidentally, the larger than modern human brain. It appears that Neanderthals preferred a warmer climate and moved south for the ice age winters - a view supported by Stewart Finlayson who has assembled data to show that hominids during the Palaeolithic did not inhabit caves when the bird and mammal species in the area were predominantly arctic species.

Long held views that complex cognition only occurred when modern humans evolved were challenged by Francisco d’Errico. He showed evidence of artwork on shells dating back 540,000 years, pigment use by at least 450,000 years ago, Neanderthal burial rituals and cave painting, not to mention the famous Gibraltar hash tag engraving. Francisco suggested that symbolic practices were triggered by environmental and social factors as well as biological so could occur independently at different times and places amongst ancient hominids. In other words the idea of a particular species introducing a distinctive art form or design of tool depending on their position in the hierarchy of species was no longer appropriate – a concept supported by John J. Shea earlier who discussed tool manufacture over the last 1.5 million years. Shea went a step further and proposed the abandonment of archaeological stone tool systematics, the linking of a particular style of tool to a particular archaeological industry such as Acheulean that is in turn linked to a period of time. Panorama of Gibraltar circa 50,000 BC

So what did happen over the last 600,000 years? It appears that small groups of nomadic hunter gatherer hominids followed their prey. As climate fluctuated during and between ice ages so the plants on which the prey survived changed their range. Previous deserts became savanna before reverting to desert. A transitory green corridor allowed some of these groups to ‘escape’ from Africa into the Middle East from which region they dispersed into Asia and Europe. In reality they were simply following the animals that comprised their diet. Once dispersed each group continued to evolve. The groups were small, so small that interbreeding to the cousin level was more common than it is today. Individual groups may have numbered only a couple of dozen members and been just an extended family. The entire world hominid population may have been only tens of thousands rather than hundreds of thousands at any one time. Occasionally two or more of these nomadic groups would meet, perhaps forced into a smaller geographical area by the increasing cold as ice ages tightened their grip on northern climes, or even by arrangement at certain times at certain symbolic locations, and genes would be exchanged. At the same meetings cultural and technological ideas were exchanged.

Meanwhile, back in Africa, small groups of hunter gatherers behaved in exactly the same way resulting in a plethora of hominids that were essentially the same genealogically but displayed physiological differences that were probably little more than racial differences. Quite major physiological differences can occur very quickly, in a matter of a few generations, even, in some species, within the same generation. Small groups of those hominids periodically exploited the ‘green corridor’ into the Middle East and with varying degrees of success increased their range into Asia and Europe. They inevitably met the existing inhabitants and swopped genes.

Is the time right? 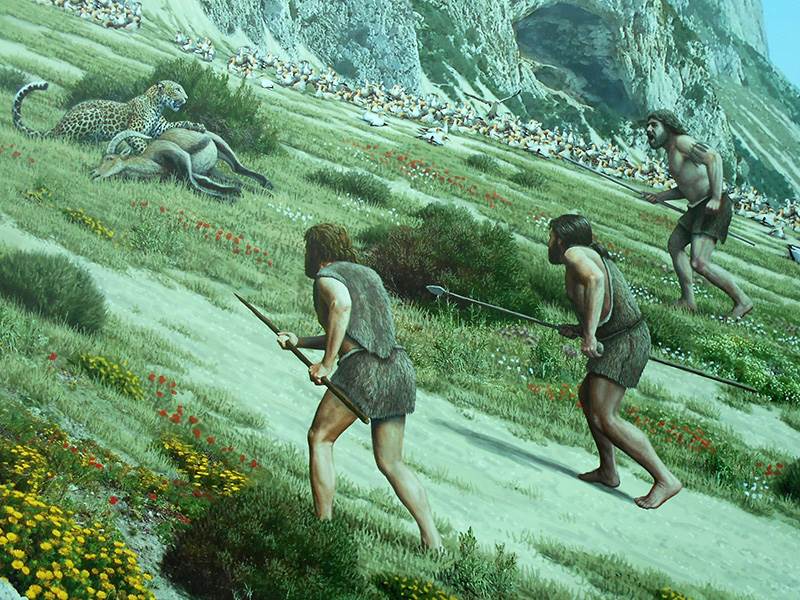 Is Clive Finlayson correct that now is the time? My view is that yes, it is. The sooner people are educated to look upon previous hominids as not that different to us and racial characteristics as just that, characteristics, the sooner those same people will start to appreciate that today all men and women are created equal. Perhaps such education could reduce tensions between races. It will be hard for those with ingrained opinions of superiority and hard for some academics within the field, to change their perspective.

As with any proposed change there is a problem. The use of the word species to describe hominids like Neanderthals, Denisovans (actually not yet classified), Heidelbergensis, Naledi et al is no longer accurate. There is no reason to think at the moment that the same processes and behaviour that led to modern humans over the last 600,000 years did not appertain before that, back through Homo erectus, Homo habilis, Australopithecus and beyond. Even the use of the term sub species or the word hybrid is not entirely accurate and even politically undesirable due to the negative implications of the prefix sub and the word hybrid. A second problem associated with species is that when archaeologists find a bone, in order to publish a paper on that bone, they have to either allocate it to an existing species or create a new species. The temptation is always to create a new species. I am sure that the combined efforts of the academic community will find an acceptable term. It is incumbent upon them to do so.

Meanwhile the Gibraltar museum have started the process of re-education by commissioning a series of Paleoanthropological illustrations from Mauricio Anton that illustrate Neanderthals engaged in various activities. Viewers will note the more benign appearance of the subjects. A long way from the brutish thug image produced over the last century. Perhaps in that sense the Neanderthals have become extinct.

Images reproduced with the kind permission of Mauricio Anton